What people say about us

Hi Just to say thank you for the inflatable last Sat - it was a great success with the kids! Regards Rita Sunbrae.

Just to say a huge thank you for the surf simulator etc.. last Saturday. It was a huge success with kids and adults alike despite the weather conditions !! Please thank the gentleman who looked after it - I didn’t catch his name - but he was wonderful ! Thank you for making my special evening even more special Kind Regards Sally Tebbutt

I just wanted to say a big thank you for Friday. You made the event a great success, thanks for getting everyone involved. Best regards Jessica DPD Group

Hi thank you so much for all your help with my daughters first birthday party. We are so happy with the service you provide us. Your team have been great help. The guys that came to set up were very polite and friendly. They did a super job. We have recommend your company to a lot of friends and family. We couldn't have done it without your help and great service. Many thanks Preetinder and Ami

Preetinder and Ami
← Previous Next → 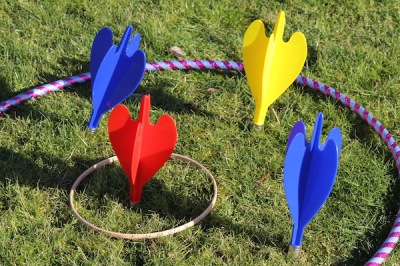 Giant Garden Darts is a huge version of the popular darts game. Played on grass only, players must throw their darts and hit the target  area which is placed on the lawned area in front of them. The length of the oche should be adjusted according to the age and abilities of the players. Children must be supervised by an adult when playing this game.

Giant Garden Darts is a superb addition to other equipment and is available to hire in Worcestershire, Gloucestershire, Herefordshire, and The Midlands.

For more information on any of our inflatables please contact us.

Top
We use non privacy intrusive cookies to ensure that we give you the best experience on our website. If you continue to use this site we will assume that you are happy for us to do so.OkRead more